‟The reality of the facts exposes your lies!” — Concluding remarks of Joaquim Forn

‟The reality of the facts exposes your lies!” — Concluding remarks of the legitimate Minister of the Interior of the Catalan Government, Joaquim Forn, in the political show trial of Madrid on 12 June 2019

The legitimate Minister of the Interior of the Catalan Government, the Generalitat de Catalunya, was declared deposed by Spain on 28 October 2017 in violation of organic law of the Spanish State — without sufficient legal basis in the Spanish Constitution — and subsequently imprisoned by the Spanish judiciary in recognisable collusive cooperation with the Spanish Government since November 2017, without there being any recognisable basis for this in Spanish criminal law. He is a prominent political prisoner in Spain and thus also in the European Union, whose fate is being followed with compassion throughout the world.

According to the United Nations Working Group against Arbitrary Detention, the detention of Joaquim Forn is arbitrary. The criminal proceedings against him, which are conducted in the first and only (!) instance before the Supreme Court in Madrid, have no basis. It violates mandatory international law (ius cogens), European law and Spanish law. The way Spain deprives Joaquim Forn of his civil rights clearly recalls the injustice of German National Socialism and Spanish Francoism.

According to the United Nations' competent body, the Working Group on Arbitrary Detention, set up by the Human Rights Council, Spain is, in the case of Joaquim Forn, in violation of Articles 2, 9 to 11 and 18 to 21 of the Universal Declaration of Human Rights and Articles 2, 14, 19, 21, 22, 25 and 26 of the International Covenant on Civil and Political Rights.

Joaquim Forn is being detained in Spain for peacefully exercising his rights to freedom of opinion, expression, association, assembly and political participation. His imprisonment violates the principle of the equality of all human beings, because it was justified by his political opinion. The criminal proceedings brought against him do not even provide the basic guarantees for a proper and fair trial before a competent and impartial court and for an adequate defence. The trial against him, a cheap farce, is a disgrace to Spain and to the European Union as a whole, which tacitly tolerates these serious violations of Human Rights.

May all people of good will hear the last words of Joaquim Forn in the Madrid show trial!

And Europe remains silent and only watching!

Concluding remarks by Joaquim Forn before the Supreme Court in Madrid on 12 June 2019:

With my first words, I join everything that my defence has said and thank my lawyers, Mr. Xavier Melero and Judit Gené, for the work they have done, as well as all the defence staff. I think you've done a very important job. I would also like to thank the families, all our families, all the people who accompanied us during these 52 sessions in the Supreme Court, and even more the people who accompanied, supported and valued us from the very first day that I went to prison, in my case on 2 November, almost 600 days ago. I shall now make a number of points to the Court on this matter.

I have been working in politics since I was 17, motivated by the desire to change things, by an ethical and social commitment and by the will to improve the country and society in which I live. Throughout my life, I have participated in countless cultural, civic and social initiatives promoted by the network of Catalan associations and federations. I have always based this personal commitment on democratic values and respect for the person as the axis of all action. You will be surprised that I explain this in my introduction, but for me it is very important to clarify the principles which have determined my political action, my personal action and from which I have never deviated.

Secondly, I categorically deny that my actions as a member of the government of Catalonia were aimed at liquidating the Constitution and attacking the constitutional order by force, as has been claimed here. When we stand before this court today, it is because of a political failure and as a punishment for the political challenge presented by the organisation of the referendum of 1 October. A referendum supported by a very qualified majority of the Catalan Parliament and also by the majority of Catalan society. On the government side, we always thought that there was an alternative way of interpreting the law, that it was not petrified and that a more flexible interpretation would allow us to reach an agreement which would lead to a negotiated solution to our demands. This willingness to negotiate was evident again and again before and after the referendum. Unfortunately, our offers were never answered by the Spanish government. There have been countless attempts to reach an agreement on the opening of negotiations or simply to start a dialogue with the state. I will not go into them for long, because I believe that many examples have been heard during this process. At no point did we conceal our intention, our willingness to hold the referendum. There has always been complete transparency, as was already the case during the consultation on 9 October.

October 1 was more than a referendum, it was a manifestation of democratic values, civilized behavior, citizenship and dignity. This court was able to hear numerous witnesses who came to vote that day. There was no vote against anyone or against anything. It was a demonstration for democracy and the right to decide. The citizens did not go to the polls stations because they would have been forced to do so by the government of Catalonia. That's how they tried to insinuate it in court.The citizens did so in full awareness of their willingness to exercise their right to vote. You may have heard some of the witnesses say: "‟t was the happy day of my life, the most important day of my life, a celebration of democracy, I will never forget it.” This is what people say when they are asked about their memory of 1 October, which will shape many generations of Catalans. It was an extraordinary circumstance of great democratic value that more than two million and 300,000 people took part in a referendum, despite many difficulties and obstacles imposed on them on that day. When this happens, the rulers have a duty to ask themselves what is the reason for the origin of this mobilization, what are the reasons that invite so many people to express their feelings and desires. Responsible governments should not react by referring a political conflict to the area of criminal law, but should seek political solutions.

I also reaffirm the peaceful nature of the referendum and all the demonstrations and gatherings that took place in September and October. Never was even a single act of violence encouraged or called upon, quite the contrary. We have always acted with the greatest possible claim to civility and peaceful emergency. This was a general constant of government and society. This is not a strategic option, but a conviction rooted in the feelings of Catalan society, which has always rejected any expression of violence. On 1 October, voting took place in around 2,000 centres. During the process, both the witnesses and the images we present refer to fewer than twenty centres where incidents occurred in the territory of Catalonia. Incidents which we condemn, wherever they come from, but which must not under any circumstances affect the peaceful nature of the vote. The authority of the Mossos d'Esquadra, [the Catalan police,] always followed the instructions of the public prosecutor's office and the court decisions. They have never received instructions from me or any member of the government to cease fulfilling their police obligations. My statements in favour of holding the referendum have never affected the commitments of the police, but have expressed my support for the political commitment of the government.

The public prosecutor's office began its investigation report with the statement that no political ideas were pursued. Allow me to question that assertion. You, the prosecutor's office, have tried to convince us that this is the case, but the reality of the facts exposes your lies. By decision of 2 February 2018, the magistrate justified my detention in prison even after my resignation from my mandate as a Member of Parliament and specifically said that this was due to the maintenance of my political beliefs on Catalan sovereignty. In the decision, the judge recognized that this conviction is an expression of my rightful freedom of expression, but because of the coexistence of my ideas and, I quote, in a context where there is no certainty that the intention to achieve Catalan independence has disappeared, he decided that I should remain in pre-trial detention. Therefore I was condemned for my ideas, for the consistency of my ideas in a certain political context. Today, I demand my freedom again. I have demonstrated sufficiently during this process that I am willing to cooperate. This has always been my intention, and I refer to my actions. On November 2nd, I went to the Audiencia Nacional to testify. At that time, I was already aware of the content of the complaint filed by the public prosecutor's office. I came back from Brussels and went there to make my statement. I received notification of the suit on a holiday, less than twenty-four hours before the hearing and with little time to meet with my attorney.

And yet I was convinced that this was my duty. I came to explain my deed because I am still convinced that I did not commit any crime. I took my responsibility for what I had done in the performance of my duties as Minister of the Interior of the Government of Catalonia.

It is true that I remain loyal to my ideals. I don't think this is a crime. I may have made mistakes, but there's no way I compromised citizens' safety. I continue to believe and fight for democracy, freedom and justice. I also believe in and defend Catalonia's right to self-determination, dialogue and respect for plurality as the only way to resolve conflicts. I avoid and condemn intolerance and any violent attitude or action. Even after nineteen months in prison, these ideals and my political principles remain unchanged. Today, more than ever, I am convinced that we will be able to resolve the political conflict in which we find ourselves only through dialogue.

A transcription of the Castilian original, the basis for the English translation, was kindly provided by the magazine L'Unilateral — El digital de la República Catalana. 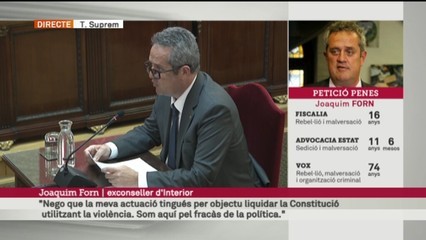 Previous
"We'll do it again!" — Closing remarks by Jordi Cuixart in the Political Show Trial on Madrid
Next
‟This trial is the result of a political failure” — Closing remarkes of Carles Mundó