SAVE OUR PARKS! Protect and invest in the UK's public green spaces - halt the slide into crisis

1. Government is at last forced to recognise growing calls for action to address the UK parks underfunding crisis

Following lobbying from the National Federation of Parks and Green Spaces, The Parks Alliance and the Heritage Lottery Fund, the Government has finally been forced to acknowledge that something must be done by the incoming Government to address the growing underfunding crisis for UK parks. A Green Space Seminar in Westminster attended by activists has led to Government recognition on need for national action, followed by backing from the Communities and Local Government Select Committee.

2. The 'Save Our Parks' UK petition sums up what needs to be done
Please promote this petition link to all your contacts in a final push between now and the General Election on May 7th: http://chn.ge/TXdqhj

The petition's influence is already being felt, being the clearest expression of the need for urgent, effective strategic action to save our green spaces under threat.

Why not sign up to support a new Parks and Health manifesto calling on Central Government 'to provide greater support for parks - for our health, for our communities' health, and for our parks health'. It urges all political parties to pledge in their election manifestos to provide the funds for parks to play their part in combating the growing problems of obesity and inactivity that are putting such a burden on the NHS. http://www.parks2015.uk/

In addition, Act for Nature is a wildlife alliance calling for a Nature and Wellbeing Act in England. They recognise that nature is under great pressure and seek the right laws now to bring about the recovery of nature for future generations. http://www.rspb.org.uk/joinandhelp/campaignwithus/act-for-nature/index.aspx

Local activists around the UK have helped make adequate funding and protection of parks an election issue.

5. Local campaigning - communities mobilise to speak up for their local green spaces

Whether campaigning to prevent further Local Authority budget cuts to green spaces, or to protect such spaces that are under threat of being sold off, local Friends Groups are mobilising to speak out. All parks lovers are urged to get involved in their local Friends group or if there isn't one help set one up!

6. The Parks Alliance steps up its lobbying efforts

The Parks Alliance aims to represent the organisations that create, maintain, invest in and use public green spaces in the UK. They believe that everyone has the right to access quality green spaces, and are calling for urgent action at Government level to protect these valuable community assets.

All park lovers are encouraged to hold an event in our local green spaces that week. There may be a number of regional events held too. www.loveparks.org.uk

8. New Friends Groups and Friends Forums continue to spread throughout the UK

All around the UK we hear of new Friends Groups being set up - there are now well over 5,000 such groups. And also new Friends Forums, such as in Glasgow and Sheffield are forming. The movement is growing! 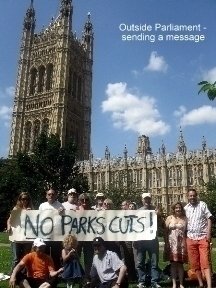 Save Our Parks! Protect and invest in the UK's public green spaces

The next Government, in 2015, must: - hold a national inquiry into the funding and management of the UK's green spaces - bring in a statutory duty to monitor and manage these spaces to Green Flag Award standard - ensure adequate public resources for all green spaces We call for all political parties to include these policies in their election manifestos.
https://www.change.org

Previous
A new year's resolution everyone can make..Save and Protect UK Parks!
Next
Campaign update, August 2015

Save Our Parks! Protect and invest in the UK's public green spaces
Shared on Facebook