The so-called «‛Transición», the supposedly rapid transition from the criminal Franco dictatorship to an allegedly democratic constitutional state after the death of the criminal of the century Francisco Franco, has proved through recent events to be a Potemkin village, a fairy tale presented to the world public, while the deep state of Francoism continued to control and supervise the levers of power, either through the monarchy set up by Franco — the Spanish king is born commander-in-chief of the armed forces — or through the Constitutional Court, the Supreme Court and the Audiencia Nacional in Madrid. There has never been a German way of coming to terms with the past in Spain, which is why, for example, German alto and neo-fascists feel particularly comfortable in Spain.

Who may be surprised that the Supreme Court, the Tribunal Supremo, with its seat in Madrid, has only recently ruled in a decision that Francisco Franco has already been regarded as the Spanish head of state since 1 October 1936?

The Spanish civil war, which the insurgents started in July 1936 under the leadership of the later mass murderer Francisco Franco, did not end until April 1, 1939. It was not until early 1939 that the insurgents, thanks to decisive military, logistical and financial support from Adolf Hitler and Benito Mussolini, conquered Catalonia, which had fought bravely against the fascist troops. Decades of brutal oppression and persecution, the true extent of which is still unknown to the general public in Europe, awaited the Catalan nation in Catalonia, in València and in the Balearic Islands, and by temporarily banning the Catalan language and relocating Spanish-speaking workers and their families to the Catalan countries, the criminal dictator attempted to force the Catalan nation to assimilate to Spain and wipe out the national identity of the Catalans and their ancient, prestigious cultural language, one of the great literary languages of Europe. Without German support, this decades-long oppression of the Catalan people would never have taken place.

If, as the critocrats of the Supreme Court had stated in old faithfulness to Franco, the dictator had been head of state since October 1, 1936, the Catalans would not have fought for democracy and the rule of law, for the elected government and for Spain and paid a high toll of blood, but on the contrary would have been the ‛insurgents’ themselves when they tried to stop the murderous gangs of the Spanish, German and Italian fascists.

The fact that the same Supreme Court is conducting a criminal trial against innocent Catalan politicians and leaders of Catalan civil movements in the first and only (!) instance, although it is not even the competent court determined by law and although the Working Group against Arbitrary Detention of the United Nations, after a long and intensive investigation of the case, officially stated «that there was no basis for pre-trial detention and the criminal trial», and demanded the immediate release of all accused and their adequate compensation, does not come as a surprise to Spanish experts.

And now the Supreme Court has shown that Spain is not afraid of destroying the democratic claim of the European Parliament by giving the duly elected MEP, Dr. Oriol Junqueras, for whom the presumption of innocence must also apply as a defendant in a pre-modern and Kafkaesque criminal trial and who has been elected by many people in Catalonia as their representative in the European Parliament, continues to be held in arbitrary detention contrary to human rights and deliberately prevents him from assuming his mandate. This is not a civilised constitutional state, this is a monstrous barbarism, a perversion of the European idea, the nightmare of anyone who sincerely and firmly stands up for the rule of law and democracy. It is the ugly face of Francoism that once again raises its head and, in harmony with brothers and sisters in spirit in Italy and elsewhere, tries to transform not only Spain, but also Europe in a way that is contrary to human rights.

A European Parliament in which Dr. Oriol Junqueras, Carles Puigdemont and Toni Comín, as properly elected MEPs, would have neither a seat nor a vote, because Spanish critics and politicians could and would prevent this for political reasons, would lose its democratic claim and would be contrary to the European idea and the European Convention on Human Rights. If the peoples of Europe allow such injustice to happen, if they do not finally put Spain in its place and clearly remember its obligations under international law, the European Convention on Human Rights, the European Treaties and the Spanish Constitution of 1978, which are binding on Spain, the European Union will sooner or later lose its moral foundations and its fundamental values and will ultimately break down on the issue of Catalonia.

The Catalans are a nation. The Catalan people can proudly look back on a thousand years of history, a vast literary tradition and many cultural achievements and national peculiarities. Catalonia is not Spain, but a nation within the Spanish multi-ethnic state. Catalan is an independent, predominantly Gallo-Roman language, which is much closer to Occitan in southern France than to Ibero-Roman Spanish, for example. Catalonia is a central part of Europe, whose citizens are now insisting on human rights, which they are entitled to inalienably and unrestrictively. And the Catalans are modern, friendly and cosmopolitan. They are part of the European Union and want to remain part of it. The European Union can no longer ignore the reality and plight of the Catalan people if it wants to be a union of Europeans and not just a federation of European states. What is happening in Catalonia, what is happening to the Catalans, how human rights in Catalonia have been and are being violated thousands of times by Spain, is of concern to all upright, democratically-minded Europeans who are committed to human rights! 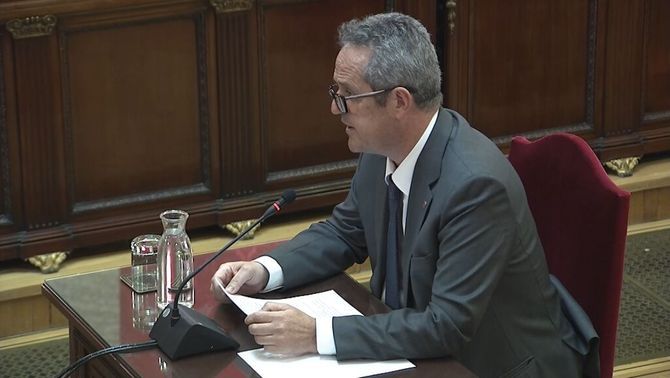 Joaquim Forn: "I am being condemned for my political ideas"

Forn "categorically" denies that he used his position as Minister of the Interior to "liquidate the Constitution" through violence Joaquim Forn used the time allowed to defendants in the Catalan independence trial to make closing statements to deny that his action as a member of the government was to liquidate the Constitution and to attack the constitutional order using violence.
https://www.ccma.cat

Previous
Working Group on Arbitrary Dentention of the UN on Political Prisoners in Spain
Next
Major demonstration in Strasbourg on 2 July 2019!