Listen to Survivors: Reject the Proposal to Decriminalize All Aspects of Prostitution

Your Sister
Vancouver, BC, Canada

Aug 10, 2015 — Kenneth Roth, the executive director of Human Rights Watch, thinks it's okay for poor women to have to do what he'll never have to do himself:

Thanks, Ken. If you could answer, if 'sex work is work', at what point will women be disqualified for unemployment benefits if they do not want to be fucked by multiple men a day in different orifices for money? Thanks in advance.

Since the last update this petition has been mentioned in the Guardian and the Independent! The latter due to a hilarious example of some very poor journalism, if you can even call it that, on the part of Alex Feis Bryce who couldn't be bothered to fact check or understand how the Nordic model is at its very core about decriminalizing the prostituted while criminalizing those who buy, pimp, trade, procure, manipulate, and abuse women and children in and for sexual exploitation. (http://www.independent.co.uk/voices/comment/despite-what-lena-dunham-thinks-sex-workers-say-keep-the-law-off-our-bodies-10426720.html)

Thanks for the widespread promotion, Alex! And better reading next time.

On the bright side, Coalition Against Trafficking Against Women International (CATW) started a petition against Amnesty International 3 weeks ago. And it has since garnered the support of Hollywood actors, as well as hundreds of international academics, activists, and front-line workers who understand that women are human beings before they are 'sex workers'. Please give this petition your support and share widely with your networks. The pro-legalization lobby has come up with their own petition supporting Amnesty's move to advocate decriminalizing all aspects of prostitution. And that's currently hovering around 10,000 signees.

Regardless of the outcome of AI's annual conference happening now in Dublin and beyond, these petitions serve as widely accessible sharing points of information, and as guages on the public's understanding of the issue. Let's do our best to show our support for abolition. Talk to your friends, coworkers, neighbours about AI's abject betrayal of women and girls. Make yourself uncomfortable. Let's stick our necks out for the prostituted, the survivors, and all those who didn't survive. If you know of any AI events happening in your city, consider ways you can disrupt or present your concerns about the sex work policy at these events. They're trying to feed us the lie that 'sex work is work'. That is isn't a brutal industrialization of female sexual subordination under patriarchy. That it isn't racism, sexism, classism commodified and skinned off the backs of poor women, brown women, indigenous women and girls. We've got to fight back. 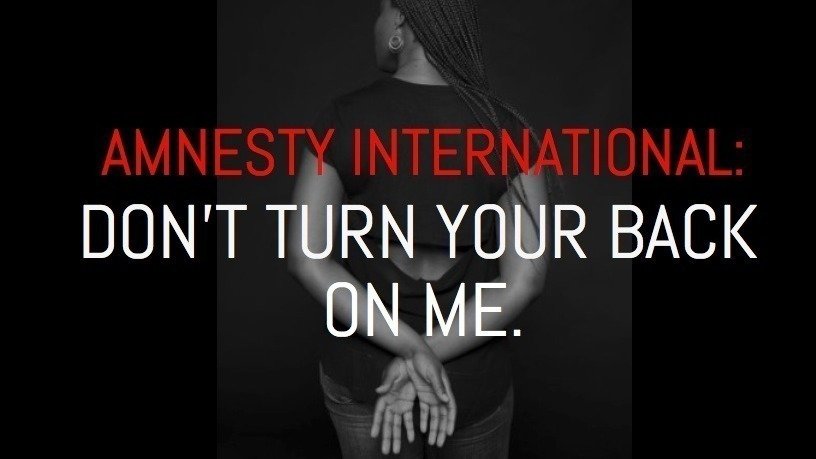 Amnesty International: Vote NO to Decriminalizing Pimps, Brothel Owners, and Buyers of Sex.

Photo: Kenya - Survivor of Human Trafficking, Advocate, and New York New Abolitionist. Photo Credit: Lynn Savarese. At its International Council Meeting to be held in Dublin, from 7-11 August 2015, Amnesty International will reportedly review an internal circular entitled " Draft Policy on Sex Work, " which endorses the full decriminalization of the sex industry, including the legalization of pimping, brothel owning and the buying of sex.
https://www.change.org

This petition had 4,613 supporters

Amnesty International: Listen to Survivors: Reject the Proposal to Decriminalize All Aspects of Prostitution
Shared on Facebook