We kindly request that Memorial Sloan-Kettering Cancer Center acknowledge their positive results with laetrile in the 1970s.

We thought it would be important for you to know that some top researchers in Germany have recently confirmed the efficacy of laetrile/amygdalin in laboratory studies. These studies have been published in the popular medical journal PLOS ONE—in August, 2014.

This only further adds to the importance of what New York City's Memorial Sloan-Kettering Cancer Center (MSKCC) found and then covered up in the 1970s: this material has anti-cancer properties in lab studies, and we need to move forward into properly designed randomized human clinical trials to see how this material fares in humans. Before we can do this in the USA, MSKCC needs to take responsibility and own up to this terrible wrong their institution have done upon the American people, and the people of the world—by lying about their own positive data on Laetrile/amygdalin.

This petition has been launched in conjunction with the new documentary, "Second Opinion: Laetrile At Sloan-Kettering", which tells the story of how MSKCC was forced by the "powers that be" in Washington DC to hide 4 years of their positive Laetrile data - with the most important aspect of this data being that Laetrile/amygdalin stopped the spread of cancer 80% of the time in studies performed under their top lab scientist at this time, Dr. Kanematsu Sugiura.

This new documentary just opened in New York City on August 29th, with rave reviews from some of New York City's top publications, including the New York Times.

"Though a documentary, it's dramatic enough to be reminiscent of "The Insider," the whistleblowing thriller about Big Tobacco."
- Graham Fuller, New York Daily News

This documentary, and its petition will continue to tour this country with full-week theatrical screenings - next stops are Los Angeles (Sept 5); San Francisco/Bay Area (Sept 12); Portland, OR (Sept 19); and finally at the AMC Pacific Place 11 in Seattle, WA (Sept 19). It is highly possible that a full nation-wide release will follow.

If you or anyone you know has been affected by cancer, please continue to spread the word about this petition, and this new documentary. 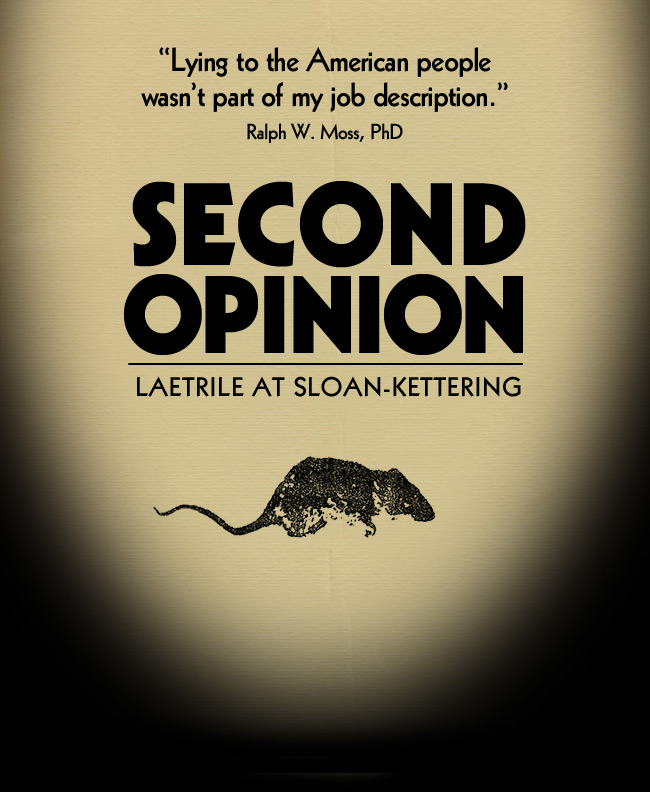 IN THEATERS NOW scroll down for more info "...Mr. Moss's message is clear, shrewdly edited and peculiarly interesting." New York Times - August 28, 2014 "Ralph W. Moss has stayed the course in stating his case. I am glad his voice is being heard." Harold P.
http://www.secondopinionfilm.com

Next
Watch "Second Opinion: Laetrile At Sloan-Kettering" FREE until October 24, 2014

This petition had 12,185 supporters