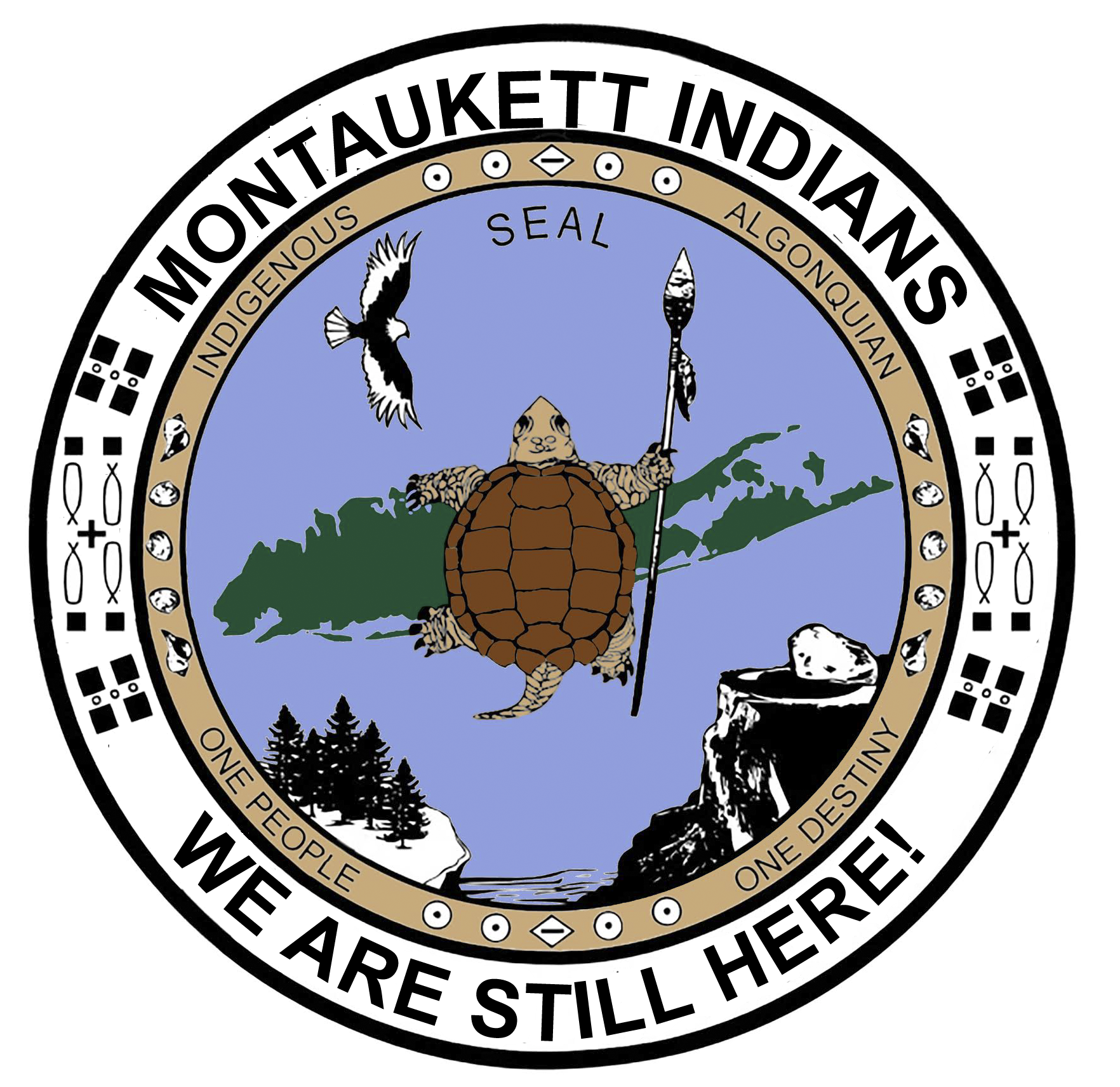 We are asking you to sign the MONTAUKETT INDIAN RECOGNITION BILL INTO LAW, and are seeking reinstatement of the New York State recognition of the Montaukett Indian Nation based on the judicial overreach of Judge Abel Blackmar. He was guilty of this grievous act in the case of Wyandanch vs. Benson, file no. 3567; therefore, it is past the time for the State of New York to reverse this injustice and recognize the Montaukett Indian Nation.

Gaynell Stone, PhD, Suffolk Archaeological Association, in reviewing John A. Strong, PhD’s book, The Montaukett Indians of Eastern Long Island states, “Strong reveals the racist nature of American society at the turn of the century and how the press set the tone with negative reporting of the Montaukett and other groups seen as marginal, since they were in the way of the Montaukett in 1909 in which Judge Blackmar, a year later, ruled there was no Montaukett ‘tribe’ subject to the protection of the laws of the State of New York or the federal government. (Strong J. A., The Montaukett Indians of Eastern Long Island, 2001, pp. 123-126)  Strong believes many of the arguments and precedents cited during the trial would not be admissible today.” (Strong J. A., pp. 130-139)

FACT #1: The greed of the Gilded Age set the tone for Judge Abel Blackmar’s decision.  During the beginning of the Gilded Age (1870-1896), the 15th Amendment was ratified giving Native Americans, like the Montauketts, who were indigenous to Long Island the right to vote in their country.  Montauketts had already fought in three wars for the Europeans, who invaded and settled their Long Island Indian Country!

FACT #2:  The US Government in 1879 made every effort to take the “Indian out of the Indian,” so Congress adopted the idea that the right reforms would be to make Native Americans behave more like Europeans and established Indian schools for this purpose.  The founder of the Carlisle Indian School, Richard Henry Pratt made the goal of his school to "kill the Indian and save the man."

FACT #3:  The following year, the US Congress passed the Civilization Regulations, a series of regulations which outlawed Indian religions, medicine men, and traditional ceremonies of the Indians.  If an Indian was on a reservation, they could not leave it without permission.  Life became even more difficult for even the Montauketts to maintain their culture and heritage, but they did!  The regulation stayed in force until 1936.

FACT #4:  The Battle of Wounded Knee (1890) took place, where hundreds of Native Americans died when the US Army attempted to end the Ghost Dance Movement, a return to traditional ways of life.  This is the environment the entire US Native American County including the Long Island clusters of the Montauketts lived in fear!  When would they be slaughtered!

FACT #5:  Beginning in the fall of 1895, the Montaukett Indian Nation marshaled their meager resources to protest the sale of their homelands at Montauk.  The family of Arthur Benson had sought out individual Montauketts and purchased their shares in the Montauk tribal lands.  This was a strategy of highly questionable legal standing, even at the time!

FACT #6:  Chief Wyandank Pharaoh, and members of the Montaukett Indian Nation organized a legal committee and hired a lawyer. They went up against the powerful economic interests of Arthur Benson’s family, one of the oldest and wealthiest in Brooklyn, and Austin Corbin, owner of the Long Island Railroad.

FACT #7:  Arthur Benson (c.1798–1889) founded the Brooklyn Gas Light Company in 1823.  In 1869, he was one of nine investors in the Brooklyn Bridge.  In 1879, Benson paid $151,000 for 10,000 acres of government owned land around Montauk in an auction; however, in the middle was Indian Field, main homeland of the Montaukett Indian Nation.  Benson made a move to get clear title to the land with promises of buying it from tribal individual members for $10 each; in one case one of the tribesmen houses was burned.  Arthur Benson’s actions opened the door for Austin Corbin to bring the Long Island Railroad to Montauk, the first train pulling in December 17, 1895.

FACT #8:  Austin Corbin (1827 – 1896), a railroad executive, who was known to use unscrupulous methods. He was responsible for purchasing and consolidating the smaller railroads on the Island and creating a monopoly, the Long Island Railroad (LIRR).  Corbin's plan was to extend the LIRR from Bridgehampton to Montauk about 20-mile.  His plan included opening a deep-water port at Fort Pond Bay, so transatlantic passengers could disembark and be transported by his railroad into New York City.  The Montauketts were in the way!

FACT #9:  After swindling the Montauketts out of their land, he found out Fort Pond Bay could not be dredged to handle the ocean vessels.  His plan never materializes, but the indigenous people, the Montaukett Indian Nation lost their historic lands, but not their traditions, customs, legends, and heritage!  Corbin was part of a group of rich business men, who believed they were superior, over particular racial groups, such as Native Americans, Blacks, and the Jewish populations were inferior.

FACT #10:  Another business interest included owning the Manhattan Beach Hotel, of Brooklyn, in 1877, where he barred Jews.  Corbin was known to be an anti-Semite, and served as the secretary of the American Society for the Suppression of Jews.

FACT #11:  Ten years before Corbin’s death, he took ownership of the Sunnyside Cotton Plantation, of Chicot County, Arkansas as repayment of the brothers John and Patrick Calhoun’s incurred debts.  As a carpetbagger on his southern plantation, he used convict laborers, as well as brought Italian immigrants to work the land.  The convict laborers were former slaves, or the first generation out of slavery!

FACT #12:  On Long Island, the Montauketts tried to fight back against an injustice, racism, and exploitation, but the expense of the trials gradually eroding the tribal meager resources.  Nevertheless, they persevered, demonstrating a capacity for discipline and political organization.  The tribe found credible evidence of manipulation, and fraud!

FACT #13:   Benson’s lawyers disrespected the Montauketts, refusing to deal directly with their appointed tribal committee, putting pressure on individual members who were not authorized to sell tribal lands.

FACT #14:  Chief Wyandank Pharaoh and Montaukett members brought three (3) lawsuits in New York State Courts against the Long Island Railroad (LIRR), and owners.  The first suit, Montauk Tribe of Indians v. Long Island R.R. Co. ( 51 N.Y.S. 142, App. Div. 1898), brought by Wyandank Pharaoh in the name of the tribe, was dismissed because the tribe had not been explicitly authorized by the state to sue in its own name.

FACT #16:  The Montaukett Indians approached the Federal government but failed in its efforts to convince the US Senate to pass legislation enabling the tribe to bring the claim in Federal court.  The judicial branches of state and federal governments at the time of the case, had no authority to determine the status of an Indian tribe.  “Only congress had such power!”

FACT #17:   A year later, the South Side Signal (Babylon) newspaper, June 08, 1901, published the death notice of Aaron Cuffee, a descendant of the Montauk Indians born 1834 had died on May 29.  Aaron had been a whale man; later a captain of a steamboat that sailed between Greenport and New London.

FACT #19:  In 1906, the State of New York passed a statute enabling the Montaukett Indians to sue, and Wyandank Pharaoh brought a third suit, Pharaoh v. Benson, in the name of the tribe.

FACT #20:  The Suffolk County News (Sayville), June 22, 1906 ran a notice stating, “To Whom It May Concern: Notice is hereby given, that, pursuant to Chapter 177 of the Laws of New York of 1906, application will be made to the United States Commissioner of Indian Affairs at his office in the City of Washington, D. C. on the 29th day of June 1906, at 2 o’clock in the afternoon, to obtain his consent to bring and prosecute an action in the Supreme Court of the State of New York, in the County of Suffolk, in behalf of the Montauk Tribe of Indians…”

FACT #21:  According to the Suffolk County News, April 10, 1908, “The Montauk Indian case known in law as Wyandank Pharaoh, as Chief of the Montauk Tribe, against the Long Island Railroad Company and others, was set down to be tried at Patchogue on Saturday, April 25.  All the parties interested promised to be ready on that date.  The action is for the possession of Montauk Point.”

FACT #22:  The County Review (Riverhead), October 28, 1910, issues stated, “Judge Blackmar Holds that Indians Have Lost All Tribal rights in Indian Field.”  The article mentioned, “The Montauk Indian suit has been in the court for years in one form or another.  The case was tried before Judge Blackmar at Special Term of the Supreme Court, held in Riverhead, last June.  The defendants in the action were the Benson, Pierpont and Hoyt families and the Montauk Company and the Long Island Railroad company.  Judge Belford was one of the attorneys for the defendants.”

FACT #23:  The New York courts held that the tribe no longer existed, and that the transactions were valid. While the case was in Appeal, the U.S. Supreme court ruled again on the authority of the judiciary to determine when a tribe had abandoned their tribal customs and embraced modernity to such an extent that they were no longer Indians.  In Buttz v. Northern Pacific Railroad (1911)  that  neither the lapse of time, allotment of a portion of the tribal lands in severalty, immigration of a majority of the tribe, nor the fact that the habits and customs of the tribe have changed by intercourse with whites will authorize the courts to disregard tribal status.

FACT #24:  The same year the court again spoke to the question of judicial authority in cases involving tribal existence. In Tiger v. the Western Investment Company (1911) the court again held that only the US Congress had the authority to determine changes in tribal status.

FACT #25:  In the end Blackmar avoided ruling on the evidence by simply ruling that the Montauketts had lost their “Indianness,” and that the tribe no longer had a legal standing as an entity before the court.

FACT #26: The Montaukett Indians appealed Blackmar’s decision in 1911, 1915, and 1917 at a financial cost to the tribal members.   “Appeals to the Federal Commissioner of Indian Affairs, Bureau of Indian Affairs, and congressional representatives are negative, ignored, or not acted upon. (Strong J. A., pp. 148-152)

In Chapter 9, ‘Nadir and Resurgence,’ Strong lists some of the many ways in which the Montaukett maintained their traditions and customs, and how they acted to protect ancestral burial grounds and other sites in a developing East Hampton. (Strong J. A., p. 160)  Stone concluded her review, “A major strength of this volume is John Strong’s extensive use of original documents to underpin his contemporary view of a highly complex story.” (Suffolk County Archaeological Association, 2001, pp. 157-160)