Stop the mass deportation flight to Jamaica on 11th February

The planned charter flight to Jamaica on 11th of February is tearing apart families and those targeted for deportation have been incorrectly branded as hardened, dangerous criminals by the government. The Home Office press office have said that they are all guilty of manslaughter, rape and class A drug possession which is a repeat of the claims by Sajid Javid in respect of the charter flight to Jamaica a year ago in a  attempt to justify the deportations and demonise those impacted but as with last year's  flight there are people who have been criminalised by virtue of their immigration status and one man we have been in touch with had a suspended sentence of a few months for defending his daughter from a man who was trying to sexually harass her. Another served 2 months for GBH  under  previous joint enterprise law.  They both came to the UK as children to join their parents here. They both have British partners and children.

One person who has a British partner of 10 years, 3 British biological children and 2 step children and extended family in the UK who was given leave to remain as a child when he first came to the UK to join his mum has now been told that he does not have enough strong family ties in the UK despite a judge having ruled last year that it would be unusually harsh to expect his  5 children  to relocate to Jamaica if he was deported.

We have also learned that several people were simultaneously  issued with removal notices and refusal notices on any potential  appeals simultaneously  after being detained.  When a group of people detained compared the notices  the wording was identical with the same reasons given for their refusals, all stating they have no evidence to demonstrate family or close friends ties, that they haven't established a  private  life and that they are likely to abscond if granted bail when in fact they all have partners, children and other close family in the UK and many having lived all their adult life and part of their childhood in the UK. Given they are all people who sign in with the Home Office on a weekly or fortnightly basis  and who have dependents then  there is absolutely  no evidence to show they would abscond. This issuing of blanket wording in the notices they are issued is disgraceful and demonstrates a complete lack of regard for their human rights and individual circumstances.

One man went to sign in at his reporting centre accompanied by his 10 year old daughter. He was taken away by two security  guards witnessed by his child, he was not allowed to call her mother and stay with her until she arrived and the little girl's bag was searched and her own phone taken. This is unnecessary and unacceptable  treatment of a child who could be permanently traumatised by these events. In 2016 a man who signed in with his toddler in a pushchair had the same thing happen and the child was handed to a Social Worker.

People born on Britain if the are convicted of a crime, are allowed to be punished, serve their time, be rehabilitated  and continue their lives. Because those now targeted were not born in the UK they are receiving a triple punishment, prison, detention then deportation.  Not to mention the destitution they face once deported and the trauma and grief experienced  by their loved ones.

We ask that you write to your MPs and ask them to raise concerns with the Home Secretary,  that you join the protest organised by BARAC UK  and BAME Lawyers for Justice,  on Thursday evening at 6pm outside Downing  Street and that you share the article in the link. If your family is impacted there are contact details provided in it for those who need advice, support or would like to share information about their cases. 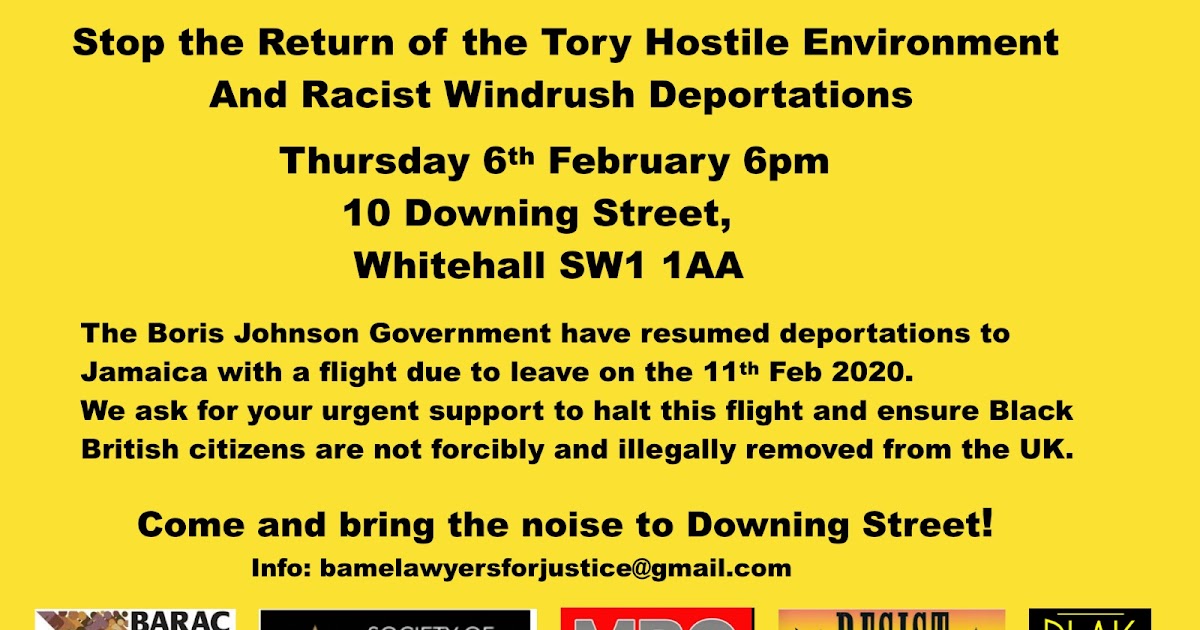 Boris Johnson's government has organised another charter flight mass deportation to Jamaica, one year after the last one. Like a dog returning to the scene of its own vomit, the Tories appear habitually addicted to racist immigration policy. This is the second such charter flight since the Windrush scandal was widely exposed, as targeting Caribbean descent communities.
http://blackactivistsrisingagainstcuts.blogspot.com