A GROSS TRAVESTY OF JUSTICE IS OCCURRING IN SIERRA LEONE

Jan 20, 2016 — Today Dr. Alie Kabba, a political prisoner held by President Ernest Bai Koroma and the APC government, was returned to the notorious Pademba Road Prison in Freetown after President Koroma and his newly-appointed Chief Justice instructed the court to revoked bail that was previously posted .

We are calling on the international community and people of goodwill everywhere to call on President Koroma and his government to release Dr. Kabba, especially now that there is irrefutable evidence that this is a primitive political witch hunt. 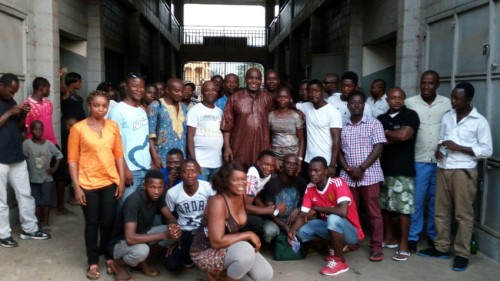 "Justice delayed is justice denied", says supporters calling for the immediate and unconditional release of opposition presidential hopeful - Alie Kabba, who has been charged by the Koroma government with bigamy, despite protesting his innocence. (Photo: Alie Kabba meeting youths in Lumley, west of Freetown, yesterday).
http://www.thesierraleonetelegraph.com