Oakland, CA-- A grass roots non-profit group, Neighbors Together Oakland (NTO), has filed a Writ of Mandamus with the Alameda County Superior Court, requesting court intervention to compel the City of Oakland to enforce its laws and policies for managing homeless encampments throughout the city.

In October of 2020, Oakland’s City Council unanimously passed an Encampment Management Policy (EMP), set to begin January 1, 2021. The EMP was created to “protect and serve all Oaklanders, sheltered and unsheltered, and to manage the adverse impacts of homeless encampments by balancing the interests of all residents, focusing encampment actions on mitigating negative outcomes as they pertain to public safety, public health, and equity outcomes.”

“This policy was virtually forgotten after the recent City Council elections. They have ignored the EMP out of fear of political blowback,” says NTO Executive Director, Seneca Scott. “For example, this past week, historic Athol Plaza Tennis Courts were finally scheduled by the City to be renovated after being a homeless encampment for the past two years, but the City stopped short due to protest over a lone holdout who refused to accept housing. You can’t ignore your own policy because it may upset your political base, especially at the expense of our public health and safety, or the security of our parks, homes and businesses,” says Scott.

For the past two months, NTO has been advocating and raising awareness about the EMP.  The policy provides a list of do's and don’t for public camping, and limits encampments near “sensitive areas” like schools, businesses, parks and residences.  It also allows for specific areas to be sanctioned by the City for the purpose of public camping.  Most importantly, the EMP does not allow for the closure of any existing encampments without first offering housing to its inhabitants.

“We are at a tipping point when it comes to city officials failing to uphold their public duty to ensure the safety and health of their residents by following their own policies in the EMP,” explained Jamie Wright, Esq, NTO’s legal counsel. “The sheer lack of direction and failure to properly provide intervention services to the encampments is a humanitarian crisis that impacts all people in Oakland, whether sheltered, unsheltered, unhoused or not. Since the city won't act on its own to follow the law, the court system will.”

In a recent news statement, the City’s Homeless Administrator, Latonda Simmons, stated that she felt “helpless....because there is no housing.”  However, NTO says that this position is unacceptable and ignores the inherent intent of the EMP, which is focused on mitigating impacts of encampments within and surrounding communities, not necessarily to solve the housing crisis itself, which many believe will require much more robust and long-range planning.  NTO is requesting that the courts intervene and hold the City accountable for enforcing the law in order to restore balance to city streets and neighborhoods, allowing all Oaklanders to occupy and enjoy spaces designated for public use. 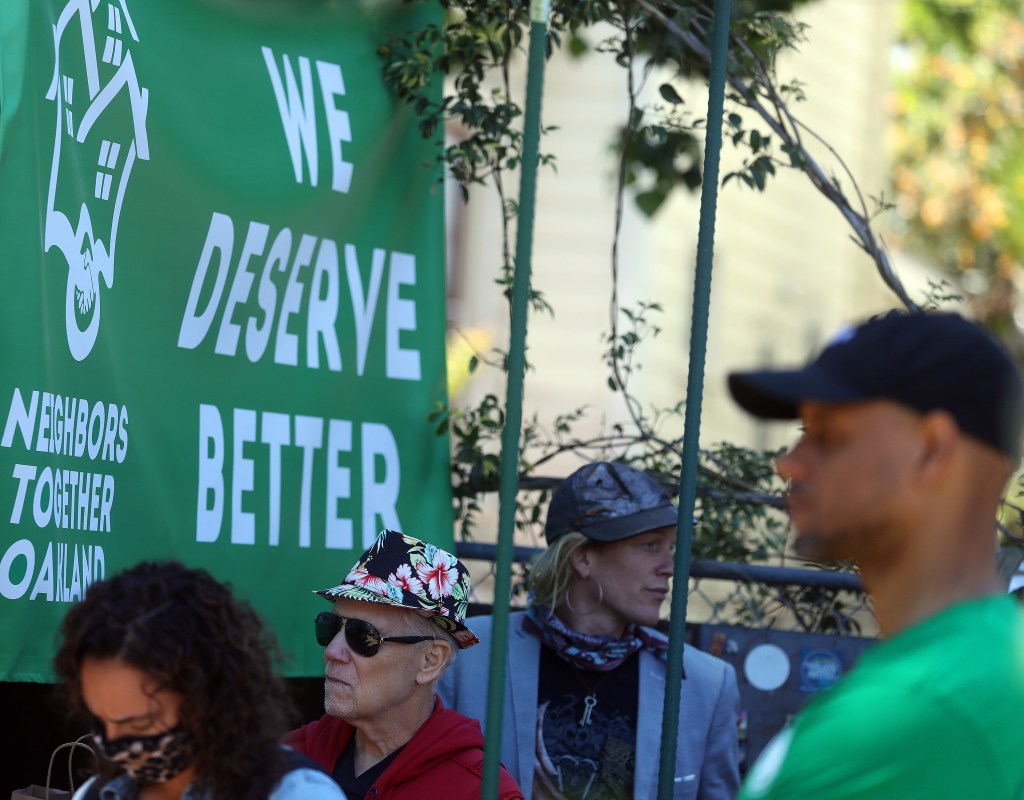 Fed up with homeless encampments that have taken over streets, parks and open spaces, a group of Oakland residents is suing the city. In a lawsuit filed this week, grassroots group Neighbors Together Oakland is demanding that the city enforce the encampment management policy the City Council passed last October.
https://www.mercurynews.com