We appeal to the disappearance and escape of a group of 20 young men, including 4 Yemenis, Iraqis, Syrians and Egyptians as well.

Many others have been stuck for months

Hoping that they could survive and find a way out of the Russian crisis, the group went on the morning of October 1 from
Moscow to Belarus, and they agreed with the group that would receive them in Belarus.  The group moved and then reached an area called Grodno heading to the area heading to the Polish-Belarus border.  After much time, about 13 hours, the team arrived from Gordo, hoping to reach the area marked by the person who greeted them.  They stay.  The team is waiting for the car to take them about 27 hours after several attempts to reach the person who took each person about two and a half thousands dollars and did not answer his phone.  The group stayed for about 30 hours and then moved to the border.  The Belarusian army deterred them from reaching the border, so they changed their direction in several places, hoping to get out, but the situation needed someone to receive them and take them by car because the distances inside the forest are very far, so they stayed about 5 days in the forest without food or drink among the bitter cold.
They couldn't find a way out because they needed a car to take them long distances to take them back to where they came from.  Some live in Russia and some do not.  Whenever they tried to escape, the Belarusians repulsed them, so they decided to flee to the border at night so that the guards would not see them, they blew up and approached the fence.  The place name below indicates its current location:
Białowiea, Poland

When the team reached this area, the Polish guards came to them and tried to interrogate them and ask them why they were standing in front of the border.  They said we were really beaten up.  This happened because the Belarusian army tortures and beats everyone who returns from the Polish border.  Polish army or blearus we are not sure which police they tried to photograph the team and help them and fetch a little water for them.  Some reported being hung up for a long time, a few months, some months, some less.
Waiting for the latest developments and details without any benefit.  The team was unable to return home or enter.  Some may die of hunger, cold or beatings.  This is the Belarusian language of the team.  Either you get into the fence or you die of hunger and cold.  The fence opportunity is very difficult, and it is difficult to chain it because there are many strong wires that are difficult to remove, some of which are electric.

To this day, they still go on without daily food, no food, no drinking, and no sleep.  4 days for them in the jungle for the mini team including the Yemenis and their Syrian companion.
In the end, the stranded was defrauded by the Polish border police.  They took the stuck passports, tore them up, and then cut off the first page of each passport.  Then they broke their cell phones and cell phones.  It is a heinous and inhuman act.  They want the trapped to die of starvation and cold, and they want them to be stuck between the fence until their end there is complete.  The story continues.  We appeal to all private parties, organizations and private segments.  We would like to inform you that they have not received support or assistance from any party concerned with the embassies, and this is their duty.  We hope to help and save the lives of dozens of them and thousands. 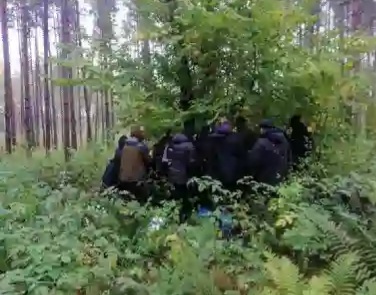