NOT ONLY ARE THE STATE AND CHILD WELFARE SERVICES UNFAIRLY TERMINATING THE PARENTAL RIGHTS OF BLACK AND BROWN FAMILIES, THEY ARE NOW CRIMINALIZING OUR RIGHT TO PROTEST.

TELL THE DA OF NORTH CAROLINA, BENJAMIN R. DAVID, TO DROP THE NO CONTACT ORDER AND TO DROP THE TARGETED PICKETING CHARGES AGAINST AMANDA WALLACE, YVONNE POLLARD, AND SHARNECE LANIER.

Amanda Wallace, co-founder of Operation Stop CPS, is a whistle blower to the racist and abusive Child Protection Services known as CPS, and is now being maliciously prosecuted  by the state due to her activism to expose the corruption of an unjust system that destroys Black, Brown, and impoverished families.   After receiving her bachelor’s of social work degree, she worked for Child Protective Services throughout NC for 10 years where she  witnessed the rights of families steadily being eroded, while the abusive powers of CPS steadily increased.

(Please watch this video of a Black mother's baby being ripped from her arms in a hospital in Kentucky.  And please read to the end of this petition for links to reports documenting how racism permeates every aspect of the the misnamed child welfare system and how Black and Brown parents are unfairly targeted for child removal.)

Amanda soon realized that she could no longer be a silent enforcer for an abusive system and Operation Stop CPS was formed.   She began speaking out against the mistreatment of Black and Brown families  by the child welfare state whose children were unfairly taken.  But not long after forming Operation Stop CPS, the harassment by the state began.

In April and May of 2022 Amanda and supporters of Operation Stop CPS began protesting outside the court house in Hanover County, North Carolina, to object to the unjust trial to terminate the parental rights of Ta’Lovonne Pollard Williams, who is the mother of three year old Ty’Ava.   To learn more about the state kidnapping of Ty'Ava, please click here. 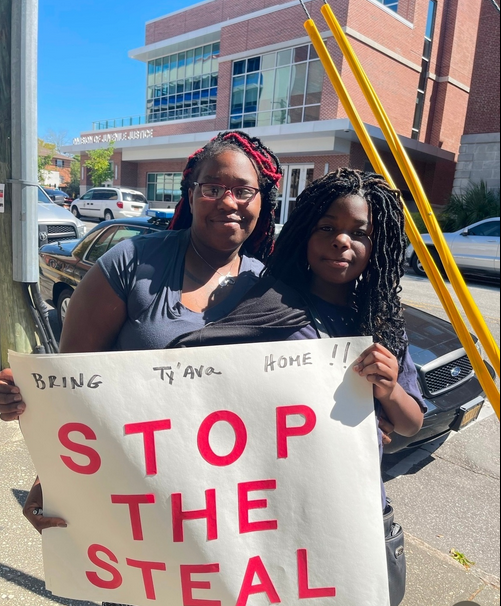 To retaliate against her, the district attorney of Hanover County in NC,  Benjamin R. David, is criminalizing the people’s right to protest and is charging Amanda Wallace with targeted picketing and violating a no contact order that was filed by CPS social worker, Katy Bell,  to prevent her from going anywhere near the trial and any building that the social worker is occupying.

In 2019 the police (with hands on guns) and CPS went to Ty"Ava's daycare center and ripped her from her grandmother’s arms and took her.  Since that time Ty'Ava's mother, Ms. Pollard, has obtained her license, reliable  transportation, stable employment and has been enrolled in parenting classes, AA, and 4 hours of weekly family counseling.  She has also enjoyed sobriety since March, 2021.  Yet in spite of Ms. Pollard becoming employed, and completing every requirement that CPS has requested, the social worker, Katy Bell,  made the recommendation to terminate her parental rights.   The trial was held in April and May, 2022.  Operation Stop CPS objected to this determination and held protests during the trial.

In a blatant abuse of power, Katy Bell took out a no contact order and accused Amanda and Ms. Pollards supporters of stalking her to prevent them from being able to attend the trial and to prevent them from protesting outside of the court house..  The court made the determination to terminate Ms. Pollard’s  parental rights and now the DA is prosecuting Amanda for “violating” the no contact order, because she continued to protest in front of the court house to bring attention to the crimes of CPS and the illegal termination of  Ms. Pollard’s rights.    Amanda is also being charged with targeted picketing because she organized peaceful protests in the residence of the two of the kidnappers, informing people in the neighborhood of the injustice.  At no time were any threats made to anyone.

The overarching relationship of the United States to Black people is one involving government control over our bodies, the selling of our children, and the criminalization of every aspect of our existence.  Racism and colonialism is systemic to every social structure within the United States and the Child Welfare System is no different.    For the majority of the 400 year existence of the US, Black families were torn apart, sold and lynched, with Black children being spared nothing.  And barely two generations have passed since it was legal for Black youth to even be educated.  This is the system that gave birth to the current child welfare system, and its punitive treatment toward Black and Brown people harshly mirrors this history.    Consider these disturbing statistics:

Black families have been under attack since the founding of this country. Our fore-parents experienced the pain of having their families ripped apart under chattel slavery; the impact of which has still not been uncovered. Now, in 2022, black families are confronted by the newest iteration of this attack in the form of Child Protective Services.  Black families, already suffering from the generational legacy of oppression and exploitation, are once again being thrown back into life-altering struggles to protect and defend their families; which is met by further attacks.

This has to stop!

Amanda Wallace, Yvonne Pollard, and Sharnece Lanier are doing what any concerned family member would do when faced with the forced removal of a child - which is to protest it. These erroneous charges infringe upon their rights to visibly and vocally oppose something they believe is wrong.    AND WE THE UNDERSIGNED DEMAND THAT THE SPURIOUS NO CONTACT ORDER AND THAT THE TARGETED PICKETING CHARGES AGAINST AMANDA WALLACE, YVONNE POLLARD and SHARNECE LANIER BE DROPPED!